Los Ingobernables de Japon (L.I.J.) is a professional wrestling stable based in the New Japan Pro-Wrestling (NJPW) promotion. The name is Spanish for “The Ungovernables of Japan” and the stable is an offshoot of the Mexican Los Ingobernables, a stable based in the Consejo Mundial de Lucha Libre (CMLL), a promotion with which NJPW have strong ties.

Los Ingobernables de Japon was formed by professional wrestler Tetsuya Naito as he returned to his native land after a stint in Mexico where he had been a part of CMLL’s Los Ingobernables stable.

Los Ingobernables de Japan are chiefly active in Japan, but also have strong ties with promotions abroad through NJPW, mainly the CMLL in Mexico and the Ring of Honor (ROH) in the United States. 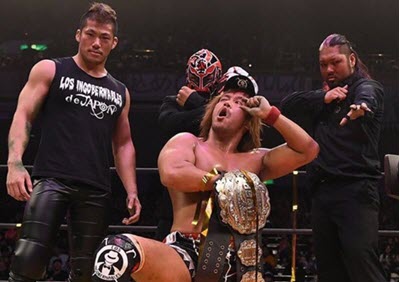 …EVIL and Sanada has won the IWGP Tag Team Championship together.

…EVIL and Sanada has won the 2017 World Tag League together.

In 2015, Naito was working as a wrestler in Mexico, where he joined CMLL’s stable Los Ingobernables. When he returned to Japan, he kept representing the Mexican stable and presented the rebellous attitude associated with “the ungovernables”.

On the 12th of October 2015, Naito was wrestling Hiroshi Tanahashi. Takaaki Watanabe attacked Tanahashi during the match, revealing himself as Naitos new partner. In an interview after the match, Naito unvealed Watanabes new ring name: (King of Darkness) EVIL.

On the 21th of November, Naito and EVIL entered the World Tag League, with Bushi joining them as a third member of the group subsequently dubbed Los Ingobernables de Japon.

On the 9th of December, Bushi defeated Máscara in a title match with help from Naito and EVIL, bringing Los Ingobernables de Japon their first championship win.

Vinnare.se is a Swedish website that teaches you how to become a winner. They teach you everything you need to know about online casino gambling, sports betting, betting on horse racing and other types of gambling. Vinnare.se will teach you all the secret tricks that you can use to maximize your chances to become a winner. Visit vinnare.se and read their best tips by click here.