Hiromu Takahashi is a Japanese professional wrestler who made his debut in August 2010, as a wrestler for the New Japan Pro-Wrestling (NJPW). After three years as a “Young Lion” with NJPW in Japan, he got the new ringname Kamaitachi and was sent to Mexico to train and get international experience with the Mexican Consejo Mundial de Lucha Libre (CMLL). Kamaitachi won his first professional wrestling championship in January 2016, when he emerged victorious from the CMLL World Lightweight Championship.

After his stint with CMLL, Kamaitachi worked for the American Ring of Honor (ROH) until he returned to NJPW in November 2016 and changed his ringname back to Hiromu Takahashi. After returning to Japan, Takahashi soon won the IWGP Junior Heavyweight Championship and held on to the title for five months. 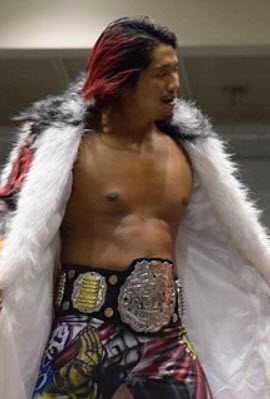 Hiromu Takahashi was born in Hachiōji, a city located in the foothills of the Okutama Mountains, within the Tokyo metropolitan area. He began taking an interest in wrestling at the age of 12 and became a fan of Masahiro Chono, who inspired him to work hard to be able to join a track and field team at school.

In May 2009, the 19 year old Takahashi participated in the NJPW annual open tryout test and performed so well that he was welcomed into the NJPW dojo. At NJPW, he trained in the same class as King Fale and Kyosuke Mikami.

Takahashi made his professional wrestling debut on 24 August, 2010, at the NEVER 1 show. Just like the other Young Lions of NJPW, he wore all black clothing and boots.

Takahashi’s first win occured on 6 February, 2011, when he teamed up with Tomoaki Honma. Together, they defeated a team consisting of Fale and Mikami.

NJPW have a tradition of sending promising “Young Lions” (NJPW wrestlers in the early stages of their professional career) aborad to gain wrestling experience outside Japan. In the summer of 2013, Takahashi was sent to the United Kingdom to work for several independent wrestling promotions. This fairly short British sejour was then followed by work in Mexico 2014-2016.

Kamaitachi and Shiego Okumura (who has worked full-time for CMLL in Mexico since 2005) constituted the team La Fiebre Amarilla (The Yellow Fever).

In January 2016, Kamaitachi suprised fans by returning to Japan to participate in the CMLL and NJPW co-produced Fantastica Mania Event. He attacked Dragon Lee and challenged him to a title match. Dragon Lee was defeated in the match and Kamaitachi (Takahashi) won his first professional wrestling title: The CMLL World Lightweight Championship.

After both wrestlers had returned to Mexico City, Dragon Lee won back the title in March.

Working in the United States

Kamaitachi moved to the United States in April 2016 and worked there untill fall when he returned back to Japan.

Takanashi returned to Japan in the fall of 2016 and made a suprised appearance at the NJPW Power Struggle on 5 November, once again working under his real name.

Takashi wrestled his NJPW return match on 16 December. Together with Naito, he defeated Kushida and Hiroshi Tanahashi in a tag team main event.

On 4 January 2017, Takanashi won the IWGP Junior Heavyweight Championship for the first time.

On 11 February, he successfully defended his title against his old rival Dragon Lee in Osaka.

He then went on to successfully defend his title against Ryusuke Taguchi in March, against Kushida in April and against Ricochet later that same month. He lost the title on 11 June to Kushida at the Dominion 6.11 in Osaka-jo Hall.

Teaming up with Bushi

In late 2017, Takashi and Bushi started appearing regularly together in NJPW’s junior tag team division. In October, they defeated Dragon Lee and Titán in the first round of the Super Jr. Tag Tournament. Takashi and Bush was later eliminted in the semifinals by Sho and Yoh.

Championship wins, awwards and other accomplishments