NEVER Openweight Championship is a professional wrestling championship owned by the New Japan Pro-Wrestling (NJPW) promotion. The championship was established on the 5th of October, 2012 and is thus a comparatively new addition to the wrestling world. It has become famous for its “gritty” title matches. 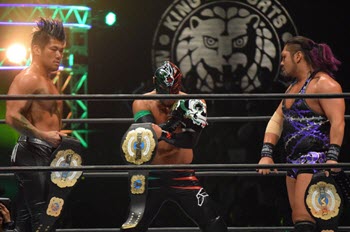 The championship has its roots in NEVER, a series of 13 professional wrestling events held by NJPW between August 2010 and November 2012. NEVER is an acronym for New Blood – Evolution – Valiantly – Enternal – Radical, and NJPW created NEVER to highlight young and promising talent, as well as wrestlers not signed to NJPW.

In October 2012, NJPW announced that NEVER was going to get its own championship: The NEVER Openweight Championship.

Originally, the plan was to have the championship title defended at NEVER events only, but this idea was soon scrapped in favor of allowing the title to be defended at other NJPW events.

The inagural champion was determined through a sixteen-man single-elimination tournament in November, 2012.

The first round of the tournament took place on the 15th of November, where 16 participants were boiled down to eigth: Shiori Asahi, Yoshi-Hashi, Taishi Takizawa, Ryusuke Taguchi, Tomohiro Ishii, Kengo Mashimo, Karl Anderson and Masato Tanaka.

The rest of the tournament was finnished on the 19th of November, with Kengo Mashimo, Karl Anderson, Masato Tanaka and Tomohiro Ishii moving on from the second round to the semifinals. In the semifinals, Anderson won over Mashimo and Tanaka defeated Ishii.

In the final match, Tanaka defeated Anderson the 39-year-old was crowned the inagural NEVER Openweight Champion. At the time, Tanaka was affiliated with Pro Wrestling Zero1, but he had ties to NJPW as well, having worked regularly for them since 2009.

While the original 13 NEVER events in 2010-2012 intended to showcase young professional wrestlers, this idea has not been held on to for the NEVER Openweight Championship. If we look at the first seven title holders, they have all been in their 30s or even in their 40s.

Though the word openweight is included in the name of this championship, NJPW has also categorized the title as a heavyweight title.

*95 and counting at the time of writing.